It’s no surprise that the city of Los Angeles has its share of stars, but once again our city has the brightest star in the nation when it comes to solar power. 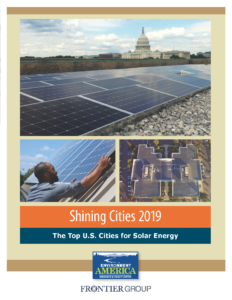 LADWP General Manager David H. Wright credits the ranking to the vibrant and diverse communities of Los Angeles that have embraced solar. “This achievement is a testament to the enthusiasm of Los Angeles residents and businesses for going solar,” said Wright. “I would like to thank our customers and communities for working with us diligently over the years to create local solar programs that deliver on the promise of solar power – environmentally, economically, and equitably.”

At the end of 2018, Los Angeles had nearly 420 total megawatts (MW-DC) of installed local solar power—a 20 percent increase over last year. That amount of clean energy is enough to power approximately 115,500 homes in Los Angeles and save 241,101 metric tons of greenhouse gas emissions — the equivalent of removing 51,869 gas-fueled cars off the road.

Los Angeles also moved up from 15th to 14th in the rankings of solar PV per person, with 105 solar watts per person—a 20 percent increase over the prior year. “The improvement in solar per capita is especially gratifying when you consider the high density of population per square mile in Los Angeles, which reflects a higher concentration of multi-family housing, compared to lower density cities that have higher rankings,” said Jason Rondou, Manager of Strategic Development and Programs.

“Going forward, we expect more residents to benefit from solar power as we expand our local solar programs, including Feed-in Tariff and Community Solar,” Rondou said. LADWP launched another new pilot program called Shared Solar in May 2019.  Shared Solar is designed to create solar access for communities with low solar installations and customers who cannot install their own solar systems.

LADWP line workers have traditionally served as the stewards of the Department’s overhead transmission lines, some of which span hundreds of miles. Thanks to a new program, five foremen and 27 line patrol mechanics will start working with a new partner – five pilots from LADWP’s Fleet Services Division. The LADWP Overhead Transmission Human External Cargo (HEC) Program officially certified all 37 participants on January 24, 2019 after three months of training procedures.

Helicopters and pilots assisting with overhead power transmission work is not new to the Department, as they are currently used for visual inspections, patrols and to transport tools to job sites and towers (known as short haul). With the new program, however, helicopters will be able to carry line workers from the ground onto a transmission structure or wire using an external line descending below the aircraft. Incorporating this practice helps line workers access hard to reach areas and creates a safer work environment by reducing climbing, increasing productivity.

Line workers use head and hand signals to communicate with pilots. (Photo by Chris Corsmeier)

“There are so many benefits for our transmission workers,” said Metro Patrol Area Foreman Jim Schultz, a program participant. “It greatly reduces the time needed to position our crews, which generally reduces risk. Fatigue is minimized by eliminating the need to climb towers with mandated climbing restrictions, and we also gain access to tower locations that have been inaccessible due to weather and environmental issues.”

This practice is common at many other utilities. LADWP’s combination of in-house staff and resources, experience with helicopter transmission work and relationships with other utilities allowed the Department to create a program efficiently and cost-effectively in just three years. In addition to the Overhead Transmission and Fleet Services Aviation teams, the program was developed in partnership with Power System Safety, IBEW Local 18 and the Joint Training and Joint Safety Institutes.

Participants completed their certification with help from external trainers from Air Rescue Systems. From November 2018 through January 2019, employees from different job classifications learned to collaborate together through classroom sessions and practical exercises on transmission towers at the Truesdale Training Center. Training included helicopter safety, short haul procedures and work practices, and “up and out” tower rescue operations.

“It was a fantastic opportunity to train alongside our line workers to build teamwork, trust and morale. The training helped us create synergy on the job and improve safety while relying on each other to conduct precision work without errors,” said Jeff Goldman, a participating LADWP helicopter pilot. “The Department is constantly evolving; it is very fulfilling to contribute to that evolution.”

The Ivanhoe Pathway was officially opened to residents and visitors on Saturday, January 26, in a ceremony at the north end of the Silver Lake Reservoir Complex, home to both the Silver Lake and Ivanhoe Reservoirs. The recently completed, 1,000 foot-long pathway is made of decomposed granite with an access ramp at one end. The project was supported by employees from Water Engineering and Technical Services (WETS), Water Operations and Power Construction and Maintenance.

“While this complex still serves an important operational function for LADWP, we recognize it is also an integral part of the fabric of this community,” said Adams. “LADWP is proud to be able to work with our neighbors to enhance access to this iconic landmark for all to enjoy.”

Both walkways are a component of the Silver Lake Reservoir Complex Improvement Projects, a series of measures that are being implemented after feedback from local residents.

The last leg of a power reliability project to strengthen an essential transmission line connecting the Pacific Northwest to Southern California has been completed. Spearheaded by LADWP’s Power Transmission and Distribution Division’s Overhead/Underground Transmission team, the Pacific Direct Current Intertie (PDCI) ground return system’s ocean electrode  was upgraded to improve power reliability and capacity for Los Angeles customers and other utilities that utilize the line.

The PDCI is a DC transmission system that has a capacity of 3,220 MW, enough to power two million homes. The original system was put in service in 1970 and has been continually maintained and expanded, but the southern ground return connection had not been replaced since the PDCI was built.

Originating at Sylmar Converter Station and terminating in Santa Monica Bay, the ground return system is designed to carry current safely when the PDCI experiences an interruption and also ensures consistent flow of electricity. The ocean electrode component provides a “ground point” where electricity can travel through the earth. As the operating agent of the system’s southern area, LADWP began a project to inspect and upgrade this portion of the line in 2014.

“This project was a unique challenge for LADWP because it included replacing both underground cable on land and submarine cable under 120 feet of water in the Pacific Ocean,” said Mohammad Khajavi, Power System electrical engineer and the project’s director. “There were a lot of technical challenges and moving parts we had to manage, but our biggest achievement is creating a team that worked well together to achieve a complete project at a cost lower than expected.”

Because the cables stretch more than four miles offshore, a barge and tugboats were used to carry equipment and work crews, and ocean divers were used to help properly install components underwater. LADWP used DC cross-linked polyethylene insulated cable for the project and installed 36 offshore vaults, using a design that exceeds safety standards and protects marine life and customers onshore.

More than 50 LADWP employees worked on the project, which was commissioned in November 2018. Divisions beyond the Power System also contributed to the project’s success through environmental monitoring and compliance, permitting and public outreach. The team’s efforts will help support reliable power flow to Angelenos for decades to come.

The project included replacing both underground cable on land and submarine
cable under 120 feet of water in the Pacific Ocean. (Photo by Jairo Guerrido)

North Hollywood High School won $1,000 for its science department for winning the division in the initial Round Robin Tournament. For placing third, the team won a trophy for the school and the students won medals.

“This is a terrific accomplishment for North Hollywood High School winning third place especially following last year’s second place finish. We are so proud of the hard working science students and their coaches. The students demonstrated that they are not only among the brightest high school students in Los Angeles, but in the nation,” said LADWP General Manager David H. Wright. “They represented our city and LADWP well. We congratulate them on an outstanding achievement.”

Science Bowl is a proud LADWP tradition and example of the Department’s commitment to the Los Angeles educational community. LADWP educational programs include the Adopt-A-School Program, an electric safety program for elementary students, Times in Education Program and the Youth Service Academy. This year LADWP is partnering with two non-profit organizations on school education programs focusing on water and energy conservation in classrooms that also include live theater performances. In addition, LADWP co-sponsored an intensive Environmental Teacher Institute involving 24-hours of training. 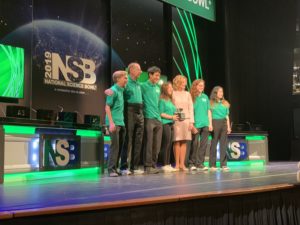